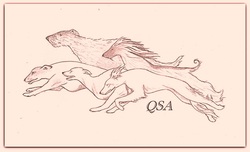 The Queensland Sighthound Association
Queensland Sighthound Association (QSA) came about when a few enthusiasts talked about starting a club for Sighthounds.  Sighthound owners and exhibitors were canvassed and, on 21 May 2012, an information evening was held with a view to forming a new club for sighthounds with 2 interests: conformation showing and lure coursing.  A steering committee was elected and their task was to get all the documentation sorted and submitted to Dogs Queensland to enable the club to become a social club.  Our first general meeting was held on 31 July 2012 when the steering committee stood down and a management committee was duly elected.

The biggest hurdle was raising the money to purchase the lure machine and equipment from America. That problem was solved when two of the club members offered to purchase the equipment and the club could pay them back when it became financial. In our first 12 months, raffles were organised, chocolates sold and sausage sizzles were manned. A dinner was organised with a guest speaker which was very successful with a couple of members and committee donating the food.  Our first fun lure coursing day was held in June 2013 when we also celebrated our first birthday. In August 2013  the QSA was granted full affiliation with Dogs Queensland and in the September we were granted permission to hold our  first Open Show on 22 February 2014.  Our first club-run competition for lure coursing commenced on the following day Sunday, February 23.

In October 2013, a submission for the rules and regulations for running lure coursing was made to Dogs Queensland with a request that it be submitted to the ANKC Conference with the intention of having the sport of lure coursing recognised as another discipline in the dogsport world. At the request of the ANKC, a working party was then set  up with representatives from each state.

In October 2014 a second submission was made to the ANKC and the rules and regulations for Lure Coursing here in Australia were recognised and came into effect 1 January 2015. The first official LC Trial in Australia was held by the QSA at Dogs Qld Sports Grounds, King Ave, Durack QLD on the 15 March 2015.  Judge for this event was Sabine Mueller and the reserve judge was Susan McDonald.

In our fourth year of ANKC Lure Coursing, the Queensland Sighthound Association will be holding 11 trials in 2018. It is becoming a fast growing sport with trials having an average of 70 dogs per trial.

The Queensland Sighthound Association was formed specifically for breeders and owners of sighthounds in Queensland. Our aim  is to promote conformation showing for all recognised sighthound breeds and the sport of lure coursing.